In Honor of Baby Kegel. And Some Other People Too.

Today's post is a tribute to some friends of mine. Which, for some reason, brings to mind that old Willie Nelson song, To All The Girls I've Loved Before. I'm really not sure why. Maybe because of that part where he sings:

I'm glad you came along
so I dedicate this song
to all the girls I've loved before...
But honestly, I can't explain how the soundtrack in my head works. I mean, I do love these two girls. Just not in the same way I think Willie Nelson would love them.

Moving on to the actual tributary part of this blog, I'd like to start with Sheridan. And if I were any kind of technical computer genius person, I would make that name light up and flash. Maybe even do a little dance.

Sadly, I think we've already established here, I am not that girl. Which is okay. Because Sheridan is not a flashy, name- in -lights kind of gal anyway. Quite the opposite, actually. In fact, Sheridan is the kind of gal whose husband once said to me, "please take her shopping and I don't care how much you spend. I just want my shirts back."

And what I heard is, "shopping spree at Nordstrom on somebody else's dime."

So we went. But I told her before we left to wear a bra, because I knew she wouldn't if I didn't make her. Except she still didn't. Instead she packed one in her purse. Her small purse. (Here's something you should know about bras. If you have borne and nursed three children, you should be wearing a bra with cups and underwire. Not one that can be wadded up and stuffed into a purse. Those days--and those boobs--are gone my friends).

But Sheridan's boobs had been hiding under her husband's shirts, and she didn't know this. So, being the charitable woman I am, I sacrificed my own bra for her use so that she could see how nice clothes look when breasts are properly positioned inside them.

She's still not convinced. Which is actually pretty awesome, because it gives me something to tease her about. And thank goodness there's one real woman in the sea of plastic that is Orange County (not that there's anything wrong with the plastic--no judgment here).

But her courage in the face of conformity is not why I want to pay tribute to her today. No, the real reason she deserves my kudos is for her tireless and underpaid efforts to educate women about childbirth. Not the sterilized, hospital, let's-make-this-as-convenient-as-possible kind, but the beautiful, calm, women's-bodies-are-amazing kind. Which I think is really cool. Because what we go through to have children--whether naturally, with an epidural, by c-section, or adoption--should be celebrated and not feared. And if you want to go to a place where it is, check out Sheridan's blog http://thegiftofgivinglife.com/. While you're there, take a look at the book she helped write, whose button I would grab, except... well, that whole computer brain deficiency thing I've got going on.

Let's move on now to friend #2, Nikki, who is as good at birthing children as Sheridan is at teaching people how to birth them. For example, one time Nikki gave birth to twins. Then about two years later she gave birth again.

Because she's efficient like that. Five kids in two pregnancies gets things done pretty quick if you're looking to have a big family. Which maybe she wasn't so much, but, hey, she's sure made life fun for those kids. Even if they don't always make it fun for her

Including the one that came a few years after the triplets. If you're counting, that's three pregnancies, six kids, and four years. See what I mean when I say that ability to have children is pretty amazing? Especially when you can have so many, so quickly.

And guess what Nikki did today. She went ahead and had another baby. Just one this time. And she waited seven years. But still, pretty amazing, right?

Before she had that baby, though, she got a little training from Sheridan about how to do it. Even though she'd already done it. Three times. But it never hurts to learn a few new tricks. Like how to hypnotize a baby using Sheridan's hypnobabies tactics (still don't think I have the definition of that right). Plus Sheridan gave her these cool stickers to put on her purse, and her steering wheel, and lots of other places, to remind her to "exercise"* 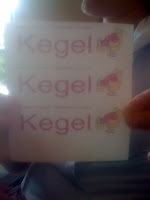 And when ﻿Nikki's kids found these stickers they thought they were really cool and wondered if they were for the baby. Because, did I mention? Her boys' names all start with K.

Oh, and the new baby is a boy.

Her kids thought so.

But welcome to the world anyway Baby K (but not Kegel). You are blessed to have such a fantastic mom who entertained herself in the hospital this week-- while waiting for you to be born six weeks early--by letting one of your big sisters do this to her: Pretty awesome mom, right? Just imagine how much fun you're going to have once you're out of that pumpkin!

* If you don't know what a Kegel is then you 1) have never given birth or 2) have some serious bladder issues if you have.  Either way, you should look it up so this post will make a little more sense
Posted by Unknown at 8:56 AM

Oh, my gosh, you are hilarious. You need to write Nikki's bio. She already has the good info, you have the wit.

It is true, I still don't wear bras (except for very special occasions) like sometimes church or evening "activities". I don't know if it is OK to say those 2 things in the same sentence.

BTW, Hypnobabies for those who want to know, is hypnosis for childbirth. http://enjoybirth.com Though Nikki is hoping that it will help baby K be nice and calm like T3 was.

The dreaded kegels. Ugh. But, so I am wishing this Nikki lady had a blog. Twins, triplets and two singles? I know I could use her wisdom!!!

Come join the par-tay! There aren't actually any cats, so don't let allergies stop you.